Small Business Goals: The Only Thing You Need to Know to Set & Achieve Them

Small business goal achievement is a challenge. In fact, more than 80 percent of the 300 small business owners surveyed for the Staples National Small Business Survey say they don’t keep track of their business goals. Yikes!

Based on that alarming stat, it’s easy to understand why 77 percent of business owners struggle to achieve their vision. What is this nefarious “thing” thwarting our efforts?

Truth be told, it’s challenging to know what actually gets in the way of achieving our goals.

The Nightmare On Goal Street

You’ve learned how to set goals. In fact, you set a target or two in your lifetime. What kind of success did it create? Did you achieve your objective or, like some, did you miss the mark?

If you strayed from your target, it doesn’t exactly endear one to the notion of setting another destination. It often opens one up to crushing disappointment and an accompanying litany of failure. <Insert damaging self-talk here.>

Many small business owners are desperately afraid to set objectives. It’s much like Pavlov’s classical conditioning theory where habits and subsequent behavior are learned by the repetitive association between the response and the stimulus. If you’ve set and missed your target enough times, it’s plausible you’ll want to avoid the painful “shock.”

Think about it. Continually missing your goals is painful! The stress that accompanies unachieved goals is staggering. That’s likely why four-fifths of goal setters make it to Valentine’s Day. The other 20% make it to the end of the quarter. Sadly, that means only 8% successfully achieve their intention. 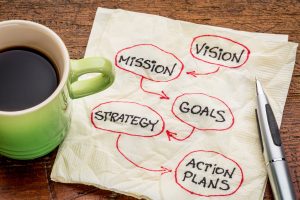 Despite the statistics, goal setting is the most important business strategy for optimal performance. In fact, investing in goals displays greater persistence, creativity, and risk-taking. It’s the ultimate anti-procrastination strategy.

A Dominican University study conducted with 277 participants revealed some encouraging results on how to more effectively set and achieve goals. Here is what they discovered:

Those in Group 1 were to think about what they wanted to accomplish for the next four weeks.

Participants in Group 2 were instructed to write their desired accomplishments and rate them as above.

Group 3 was asked to write their goal, rate them, and formulate actions to achieve their desired result.

Group 4 was instructed to write their intended achievement, rate it, formulate actions, and send their targets and actions to a supportive friend.

And, finally, participants in Group 5, wrote and rated their goals, formulated actions, and sent their plans to a supportive friend along with weekly progress reports.

The results? Seventy percent (70%) of the participants who sent weekly updates to a friend reported successful goal achievement! In fact, 76% of the participants in Group 5 achieved their targets or were more than halfway to achieving their goals, compared to 43% of Group 1.

The results of this study demonstrate the effectiveness of coaching tools including:

Properly setting and implementing goals is still the best map for us to realize success. With this critical skill, we function as champions in our business.

Are you ready to step out on achieving those all-important goals? If so, consider sharing your goals—and your progress—with a friend. Or, better yet, join us at Eureka!, where CEO’s, Founders, and Small Business Owners collaborate to make their business work better.

Menu
© Synnovatia 2020
Fill Out Your Email Address To Login.