How Entrepreneurs Reinvent Their To-Do List For Better Performance

Much has been written about the infamous to-do list. Whether it’s sketched out on beautifully printed stationery or scribbled on the back of an used envelope, it is the bane of existence for overwhelmed entrepreneurs. I often wonder—is it the use of a list that contributes to greater performance for the entrepreneur? Or, is it what is on the list that exerts the influence needed to make each day count? 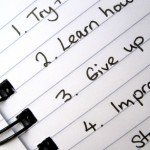 The first time I heard of the “to-do” list was through the story of Charles M. Schwab, the owner of Bethlehem Steel. It sounds a bit like folklore today but as the story goes, Mr. Schwab’s steel business was plagued by inefficiencies. To curb the business inadequacies and raise productivity, Schwab engaged Ivy Lee, and efficiency expert.

After listening intently to the dilemma faced by Bethlehem Steel, Lee agreed to help. In exchange, Charles M. Schwab would pay Mr. Lee whatever Schwab felt the results were worth. (How would you like to use that pricing strategy in your business?)

Lee’s advice to each member of the management team was to create a list of the six most important things that needed to be accomplished in a day. Once the list was created, the managers were asked to organize their tasks according to priority.

Each day, the managers were to start at the top of the list and work their way to the bottom focusing on one task as a time. Whatever remained unaccomplished on the list would be added to the next day’s list.

The $500,000 Business Solution for Today’s Entrepreneur

The story of Bethlehem Steel and Ivy Lee has valid points that influence productivity even in the digital age. Such things as making a list of what needs to be done, organizing them by priority, focusing on one task at a time, and starting at the top and working down, have a place in our busy, disorganized, interrupted, and distracted days.

Having only six tasks to accomplish in a day feels like heaven, doesn’t it?  A quick Google search reveals a flurry of apps with the promise of making the day more productive.

The challenge entrepreneurs face with more to-do’s on their app than hours in a day is that the body was not designed to work incessantly. Study after study has proven work-life balance for entrepreneurs does, in fact, improve performance.

What are the tasks that needed to be added to the 21st century to-do list? These are just a few that we recommend based on our extensive research:

Don’t take my word for it. Try adding these items to your to-do list for 2 weeks. Experience what performance really feels like!

Menu
© Synnovatia 2022
Fill Out Your Email Address To Login.