With Facebook Pushing Paid Posts, What are Your Social Media Alternatives? 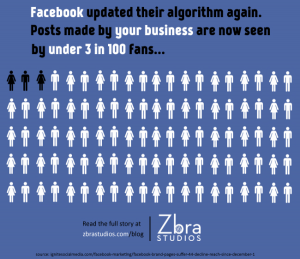 If you’ve noticed less interaction on your Facebook business page recently, you’re not imagining it. Last month Facebook tweaked its algorithm, drastically reducing visibility for businesses — unless you choose to pay for boosted posts, or ads.

Now, we don’t recommend abandoning Facebook altogether — it’s still important — but if you’re not ready to pay a social network directly for your marketing endeavors, here are some of the best alternatives:

Google+
Only two years after launch, Google+ closed out 2013 with over 540 million active users. Some still have it pegged it as a failed Facebook imitator, but Google+ isn’t trying to be Facebook; it’s trying to take the best parts of Facebook and Twitter, and wrap them into Google. We could go on at length about how valuable this network is, but at the moment we’ll leave you with one major takeaway: If you don’t have a Google+ account for your business, start one now.

Pinterest
This isn’t the ideal network for every type of business, but for highly visual, product-based companies, it’s ideal. A study of over 1,000 brands in October found that each time a user pinned a company’s product to one of their boards, that pin was worth — on average — 78 cents in sales conversions. In December, studies found that over the course of 2013 pins drove 25% more sales than they did the previous year. Expect those numbers to grow further this year.

LinkedIn
One of the greatest strengths of LinkedIn is the Business to Business (B2B) marketing aspect. For companies offering professional services which aren’t easy to advertise traditionally, LinkedIn is ideal. How? Join a group in your target market and get active there. The more you contribute (without just link spamming), the more your posts will be featured in that group — and the more you’ll build a relationship of trust. It’s through those connections you’ll be able to offer your services, and begin to build a reputation for yourself as “an influencer” on LinkedIn.

Twitter
When Twitter first came out, a lot of people didn’t know quite what to do with it (a theme for most social networks). Now, it’s built a reputation for having a pulse on current news, and can be a major player in driving traffic to your website for content marketing. Don’t confuse Twitter’s 140 character limit for a lack of depth, though — pushing your own content is only recommended maybe 20% of the time, while the rest is all about building relationships.

Finding the social media strategy that works for you

The key to success on any social media platform is genuine interaction. You can’t just waltz in and start announcing your sales pitch — you’ve got to build relationships on the platform first, engaging in discussion, and generally putting the “social” in social media. To do that, you first need to decide which platform is the most appropriate to your business, and focus your time and energy there.

Then, it’s time to decide: will you manage the social media for your company, or will you hire someone to do that for you?

Psst: if you choose the latter, we know just the company for the job…

See that? Sales pitch after you shake hands and make friends.

Zbra Studios is a full-service Digital Marketing Studio based in Los Angeles. When they’re not geeking out over social media stats and tactics, they’re helping businesses develop effective online marketing strategies for use in the ever-changing web. Visit them at www.zbrastudios.com.