Got a Boat to Burn in Your Small Business? I’ve Got a Match!

Whether you’ve been in small business 6 days or 6 years, you understand the excitement of a pending new product or service launch. You also know how terrifying it can be. Fear and trepidation can sideline smart and potentially successful initiatives. 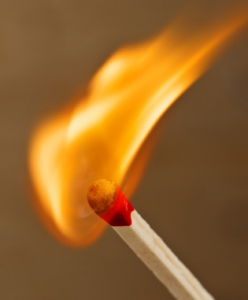 There’s only one solution to make sure your launch goes off without a hitch – grab a match!

Launching a new product or service can feel like running to second base with your foot on first. You really want to move forward but…..(fill in the blank). You get caught somewhere in the middle and are unable to move. That’s an accurate reflection of recent conversation with a former small business client.

On the verge of launching a program she passionately believed in, my client was “dragging her feet”. She wanted to take the risk yet feel safe and assured at the same time. Wouldn’t business be less stressful if both could be accomplished? Unfortunately, that’s not how it goes. An endeavor of any value requires courage to launch. Risk is a permanent part of the equation.

Our conversation reminded me of story I heard years before. Here’s how The Daily Awe tells it.

Ancient Greek warriors were both feared and respected by their opponents. The Greeks were ace at “dramatic demonstration” in order to get the best action out of their soldiers. Once the Greek warriors were dropped off onto the enemy’s shore, the Greek commanders would shout out, “burn the boats!” The sight of burning boats removed any possibility of retreat from the hearts and minds of the Greek warriors. Imagine the impact this had on the soldiers – to see their “safe haven” go up in flames. They were left with no choice but to fight to win — the only way back home was through victory.

I love this story! It’s a story of risk, courage, adventure, and success.  It’s the entrepreneurs story, isn’t it.

I’ve had my share of times in my small business when I wanted an “out”. Having an “out” also meant I wasn’t fully “in”. I wasn’t completely committed. I left a boat waiting on the shore just in case I felt the need to retreat from the heat of battle. Have you had that experience?

What smart, strategic initiative is making you “drag your feet”? Is there a boat or two in need of burning in your business? If so, I have a match. 😀

Request a Strategic Consultation for Your Business